Skip to content
wakeupprincess Artistry, Deepening Your Writing and Art, Inspiration, Painting, The Art of Becoming, The Creative Pursuit, Writing as a Wake-Up Tool June 28, 2020 1 Minute 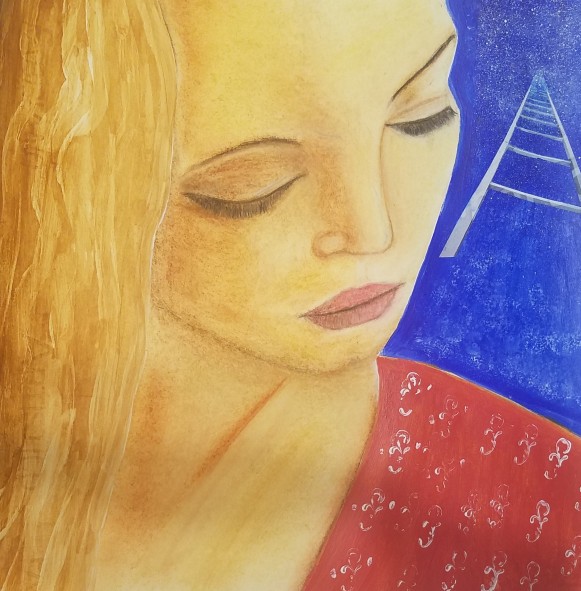 With the guidance of artist, Marie Ndolo, I continued to work on the human face.  So much to learn.  And hair, how to paint hair that looks sort of real.

She appears contemplative.  She is pondering the higher realms.  In this painting, the color red is an earthy color, keeping her grounded.  The blue is more ethereal and the image of the ladder floating in space is definitely other-worldly.

Tilting a face, drawing and painting the angle of a face is a challenge.  And, doesn’t a tilted head give a whole other tone to the painting.  Do you think so?  A tilted head is almost like floating a question in the air.  Or listening for an answer, perhaps.

I’ve always liked the image of a ladder floating in space.  Ladders, we climb them to get to something up higher, out of our reach.  It seems like a good symbol for this painting.  Sometimes a stairway suffices.  But no, I like ladders.

Like the one that Georgia O’Keeffe painted, Ladder to the Moon (1958).  The painting is of  a wooden ladder suspended in a turquoise sky.  I wondered what prompted her to paint that?

Here’s what I found out…

“A long, homemade ladder used to lean against Georgia’s house at Ghost Ranch so that she could climb up onto the roof and gaze out at the vast desert landscapes. Sometimes she would even climb up there several times a day. At night she would climb up on the roof if she wanted to gaze and fall asleep under the stars.”

“In the picture, a large wooden ladder is leaned against an outer wall of a patio from where it rises up into the sky with the Pedernal Mountains in the background. Some say her immediate surroundings at Ghost Ranch were the inspiration of this piece of art. Others interpret the painting as a religious work. In Pueblo culture the ladder is used to symbolize the link between the Pueblos and cosmic forces. The fact that the ladder is pointed up in the sky may represent the link between nature and the cosmos”

I am a writer, a seeker, a discoverer, a poet, a painter, a woman with something to say about a variety of topics. Some topics are difficult but they are real. Some are sheer silliness. View all posts by wakeupprincess

2 thoughts on “Ladder to Heaven”