Santos Dolls take their name from the Spanish word for Saint.  In the 17th century, these dolls became popular.  They were originally carved by priests as a tribute to a saint.  They embodied a virtue or a quality that you wanted to bring into your life.  They were used for in-home altars.  If a small village didn’t have a priest, the in-home altar with the Santos Doll sufficed.  Also, during times of war, especially in the 1700’s and 1800’s when people were unable to travel to church, their development flourished.

Julie Ann Lee taught a class on making Santos Dolls.  Her dolls are more authentic with crackly faces to make them appear antique.  I veered off course to make my own meaningful dolls.  I enjoyed creating these little dolls so much that I decided to make several.  They are not strictly Santos Dolls.  This was where my creative impulse lead me.  A ballerina with red galoshes for instance.  A mermaid queen.  A woman with a purple dress.  And the androgynous figure with a magenta jacket.  What’s it all mean?

Carl Jung would certainly have something to say about these figures who emerged from my own subconscious.  None of these dolls was planned.  For me, they were a very intuitively guided process.  Entering into that place of being guided, is somewhat like being in a shared dream…you and your creation in communion. 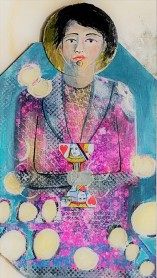 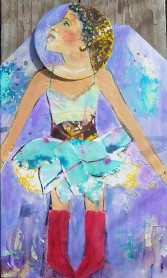 I am a writer, a seeker, a discoverer, a poet, a painter, a woman with something to say about a variety of topics. Some topics are difficult but they are real. Some are sheer silliness. View all posts by wakeupprincess

2 thoughts on “Santos Dolls–Sort of Although Not Really”