Comparison is a tender spot for many an artist.  Last week, at an art exhibit where I had a piece on display, I heard myself repeatedly minimizing my painting.  I had already walked around the exhibit and seen the work of masterful artists, some of whom had been painting for their entire lives.  Inwardly, I went into “I’ve only been painting for five  years.  I’ve learned what I’ve learned from online classes, my own practice and experience.  I never went to art school.”  In other words, I diminished my art and myself.

When someone complimented me or said they liked the painting, I said “You’re being kind.”  I heard myself nearly apologizing for my piece!  Where on earth did all of this self-denigration come from?  Thinking about it in retrospect, it feels painful.

Yesterday, when a friend said I should send an online portfolio of my art to a larger venue, like San Francisco or the bay area at least, I nearly laughed.  “You must be kidding!” I said.  But she wasn’t.  She had seen several groupings of my art and said that she recognized my unique style.  “You have a style,” she said.  “Why not try?” she queried.

So here it is, in my face once again–the artist produces a product.  It matters less about the “expertise” of the painting as to what the process was for me.  What is the journey I took to bring this painting into fruition?  Did I take the journey with acquiesce or protest?  Did I allow myself to be guided by the question what next?  Did I push through the “ugly” stages and arrive at a better place?  Did I say what I wanted to say?  Did I fall in love with my piece, finally?  I DO NOT HAVE TO MAKE EXCUSES FOR ANY OF THIS!

****
Being an artist, like being a human, isn’t about comparison.  It is about SELF-EXPRESSION, your personal process and if you so choose, sharing your gifts with others.
In the Desiderata, the author reminds us “always there will be greater and lesser persons [artists] than yourself.”

Finally, he says, “Be cheerful.  Strive to be happy.”

I received one of those dreaded phone calls.  My ex-husband had a stroke!  It wasn’t looking good.  A surge of helplessness arose in me.  And fear.  I live a distance from where he lives.  I needed to do something while waiting for news.  This painting is by no means a work of art.  However, this is what I was prompted to paint.  I call it “Prayer.” 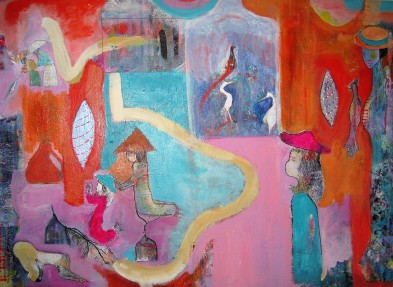 When I first began painting in 2014, it was all about following my intuition.  As I added marks to the canvas, I noticed images.  I defined some of those images.  My expertise at drawing, combining colors and making a painting cohesive didn’t exist.  However, intuitive painting was a good way for me to begin this artistic journey.

I quickly discovered, that like poetry and journal writing, painting facilitated my personal process.  In this particular instance, painting helped me to handle the big emotions and the feelings of helplessness.  (It has been a long road for my ex-husband, but he did recover from the stroke.)

While I believe everyone is an artist (sometimes hidden), writing and creating art are also callings.  As a writer who has journaled for many years, I have conducted a self-exploration that perhaps few people conduct over the course of their lives.

Does there come a time when this type of self-exploration becomes wearisome?  And then what?  Is there a point when the inward journey shifts to outward service? Or, perhaps it is a simultaneous venture–personal discovery and then expanding that into “How can I serve?”

Writing Prompt:
Do you translate your creative pursuit into service?  What does that look like?

“10,000 flowers in spring
the moon in autumn
a cool breeze in summer
snow in winter–
If your mind is not clouded
by unncecssary things
this is the best season of your life.”
by Wu-Men (Chinese poet)

Isn’t that a secret we’d like to have an answer to–how to stay present within this moment and not drift off into the past, future, fear, worry, conjecture, etc?  At least more of the time. Being present to one’s daily life experience is desirable.

However, when we write (or paint or create art), we move in all directions, don’t we? There is very little that is linear about the creative process, especially in the initial stages.  That said, I begin with an intention.  Even if I seem to veer off course.  For me, setting a creative intention rouses personal process. The goal then is to stay present with my process as I write or paint–wherever it might take me (even when it changes course from my original creative intention).

Year ago, I began reading a translation of the French author, Marcel Proust’s classic, Remembrance of Things Past, otherwise known as In Search of Lost Time.  At that time, I found that reading the first volume (one of seven) was both laborious and tedious.  My mind stumbled over the slow revelation and wanted to skip ahead to get to the story behind the array of descriptive words.

Today, I realize that one of the author’s intentions was to explore memory itself and take the reader on a journey through his process around resurrecting his memories.  He considered both voluntary memory and involuntary memory.  An often recounted episode from his book is the memory evoked when tasting a madeleine cake dipped in tea!

“No sooner had the warm liquid mixed with the crumbs touched my palate than a shudder ran through me and I stopped, intent upon the extraordinary thing that was happening to me. An exquisite pleasure had invaded my senses, something isolated, detached, with no suggestion of its origin. And at once the vicissitudes of life had become indifferent to me, its disasters innocuous, its brevity illusory – this new sensation having had on me the effect which love has of filling me with a precious essence; or rather this essence was not in me it was me. … Whence did it come? What did it mean? How could I seize and apprehend it? … And suddenly the memory revealed itself. The taste was that of the little piece of madeleine which on Sunday mornings at Combray (because on those mornings I did not go out before mass), when I went to say good morning to her in her bedroom, my aunt Léonie used to give me, dipping it first in her own cup of tea or tisane. The sight of the little madeleine had recalled nothing to my mind before I tasted it. And all from my cup of tea.”
— Marcel Proust, In Search of Lost Time

WRITING PROMPT:
Invoking a memory is considered a voluntary memory as you have chosen to retrieve a memory from the past and write about it. Proust compares voluntary memory to involuntary memory–which has a visceral quality to it and can therefore be expressed as a vivid and direct experience with greater impact for the writer and the reader.
Have you had this experience…something in the moment triggers an old memory and brings it fully into the present…so much so that all of your senses are awakened around that memory?  Have you written it down?

****
In the movie Ratatouille, at the end, the food critic is sampling the chef’s ratatouille dish and is transported back to his childhood and the savory comfort food that his mother served him.  He is personally comforted by the memory as his tastebuds approve of the dish.